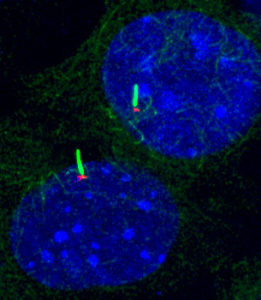 nce overlooked as a mere evolutionary vestige, the primary cilium is now recognized as the antenna that senses and conveys signals into the cell from the extracellular milieu. This microtubule-based, membrane-ensheathed organelle protrudes from the surface of most cells in our body. Its miniature volume dramatically concentrates signaling molecules for efficient and precise transmission of their messages into the cell.

Not surprisingly, ciliary dysfunction is associated with a plethora of human diseases, ranging from kidney malfunction, to cognition impairment and skeleton abnormalities. These diseases, collectively known as ciliopathy, implicate mutations in more than 40 genes. Remarkably, with such wide-reaching effects, most ciliopathies exhibit deficits in brain structure that derive from embryonuc malformation. Evidently, primary cilia play a fundamental role in brain formation.

Motivated by the pivotal role of the primary cilium in the brain, we aim to elucidate the comprehensive network of signaling pathways in the primary cilium of the developing brain. Ultimately, we strive to uncover the molecular etiology underlying ciliopathy and offer hope for therapeutic interventions. 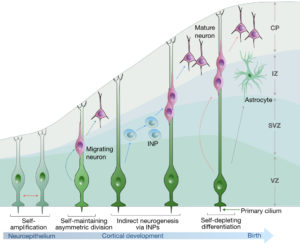 Construction of the cerebral cortex begins with radial glia (RG), the neural progenitors that produce all neurons in the cortex. RG display a remarkable feature in that each cell expands the entire depth of the developing cortex, with a primary cilium projecting into the lateral ventricle. Cerebrospinal fluid (CSF) fills the lateral ventricle, exposing cilia to the signaling molecules and metabolites that circulate within the entire developing nervous system. The primary cilia sense these molecules and transmit them as signaling cascades into the RG. These signals serve as important regulatory mechanism to dictate cell division and differentiation of RG, which produce most of the projection neurons in the brain. RG also serve as guides for migrating newborn neurons, leading them to the correct locations in order to form the brain’s circuitry. Proper development of cortical structure thus depends upon the guidance of RG and its response to signaling cascades. Any disturbance in this orchestration results in brain developmental defects.

What is driving this elegant developmental program? Which signaling cascades are triggered in the primary cilium? We will combine biochemistry, molecular and cell biology, and mouse genetics to tackle these questions. We aim to draw a full picture of signaling pathways mediated by the primary cilia, and how their disruption leads to brain developmental defects.

Regulation of the Hedgehog signaling in pediatric brain tumor

Medulloblastoma (MB) is the most common childhood brain tumor. It comprises 10-20% of primary neoplasms in the central nervous system. Hedgehog (Hh) pathway-related MB originates from over proliferation of granule neuron precursors (GNPs) in the developing cerebellum; it is highly invasive and can metastasize throughout the central nervous system. Current treatments, which includes aggressive surgery combined with radio- and chemo-therapy, bring devastating side effects to the survivors. Even after, this treatment regimen fails for one-third of the patients. Vismodegib, the newly developed Hh-pathway inhibitor, targets the upstream transducer of the Hh pathway. However, the drug’s effect tends to be transient. Irreversible drug resistance and tumor relapse often ensue. Thus, effective treatment with milder side effects necessitates targeting downstream players of the Hh pathway.

Aiming to gain deeper understanding of the 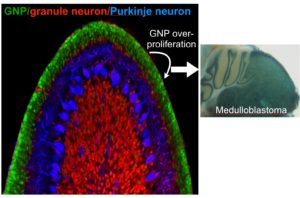 regulatory mechanism of the Hh pathway, we are striving to answer the following questions: